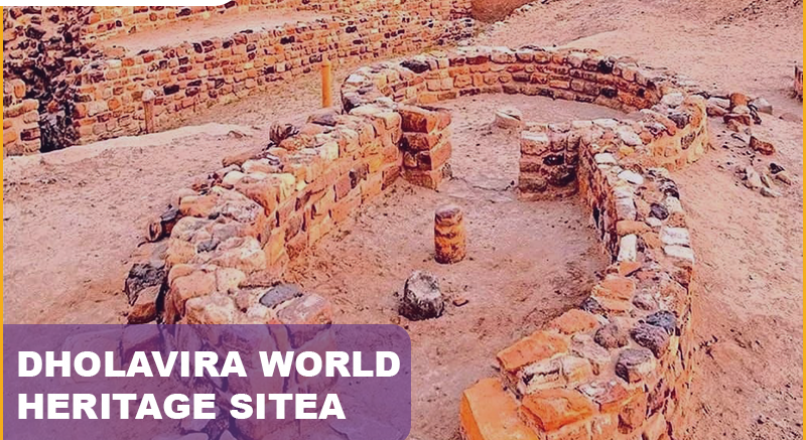 Recently, UNESCO has declared the Harappa city of Dholavira (Gujarat) as the 40th World Heritage Site of India. Dholavira is the first site of the Indus Valley Civilization (IVC) in India. Apart from India, Italy and Germany, China and France have 40 or more World Heritage Sites.

After Mohen-jo-Daro, Ganveriwala, Harappa and Rakhigarhi, and Dholavira is the fifth largest metropolis of the Indus Valley Civilization.

The site is in ruins of an Ancient Harappan city. Dholavira comprises two parts:

1)It is a walled city and a cemetery to the west of the city.

2) The city of Dholavira had a fortified fort with a fortified belly and ceremonial ground attached to it, and a fortified Middletown and a lower town.

Here the ground is scanned by ‘Ground-penetrating radar (GPR)’. The scanning revealed that at that time the city had a system of dams, canals, reservoirs, wells.

Its located in the KhadirBet Island in the Kutch district of Gujarat.

Dholavira’s location is on the Tropic of Cancer.

It is located on Khadir Bet Island in the Kutch Wildlife Sanctuary in the Great Desert of Kutch.

Unlike other Harappan predecessors, which are usually located near rivers and perennial sources of water, Dholavira is located on Khadir Bat Island.

Dholavira, one of the five major cities of the Indus Valley Civilization, is 250 km from Bhuj.

Artifacts that were found include terracotta pottery, beads, gold and copper ornaments, seals, animal figurines and tools, urns, and many more.

1) Remains of a copper smelter indicate Harappa, who lived in it, knew metallurgy.

2) The traders of Dholavira used to source copper ore from present-day Rajasthan and Oman and UAE and exported finished products.

3) Dholavira was also a hub for manufacturing jewelry and semi-precious stones.

Unlike graves at other IVC sites, no mortal remains of humans have been found in Dholavira.

Distinct Features of the Dholavira Site:

3) Two multi-purpose grounds, one of which was used for festivities and the other as a marketplace.

The fall of Dholavira also coincided with the fall of Mesopotamia, indicating the integration of economies.

1) The Harappans were seafarers, they lost a large market, affecting the local mining, manufacturing, marketing, and export business after the decline in Mesopotamia.

Dholavira had entered a phase of severe drought due to climate change and the drying up of rivers like Saraswati.

2) Due to the drought-like conditions, people started moving to the Ganges valley or to South Gujarat and further to Maharashtra.

Other Harappan Sites in Gujarat

Before the excavation of the Dholavira site, Lothal, in Saragwala village on the bank of Sabarmati in Dholka of Ahmadabad, It was the most prominent site of IVC in Gujarat.

Rangpur on the bank of Bhadra River in Surendranagar was the first Harappan site in Gujarat to be excavated.

Rojdi in Rajkot, Prabhas near Veraval in Gir Somnath, Lakhabaval in Jamnagar, and Deshalpar in Bhuj taluka of Kutch are among other Harappan sites in the state.

Apart from Dholavira, Gujarat has 3 other UNESCO World Heritage Sites.